Efficient irrigation is an important factor to support crop growth. A uniform...

The length of the throw determines the area being irrigated. A longer throw...

Pressure greatly determines the operating cost of an irrigation system: the...

It is important that every irrigation system operates reliably in order to...

It is fundamental that a gun adapts to every situation while keeping excellent...

Efficient irrigation is an important factor to support crop growth. A uniform water distribution helps the soil to evenly absorb the water, consequently avoiding water run-offs. This greatly promotes even plant growth throughout the field and at the same time can increase the yield and its quality. A fine water application also allows to grow sensitive crops. 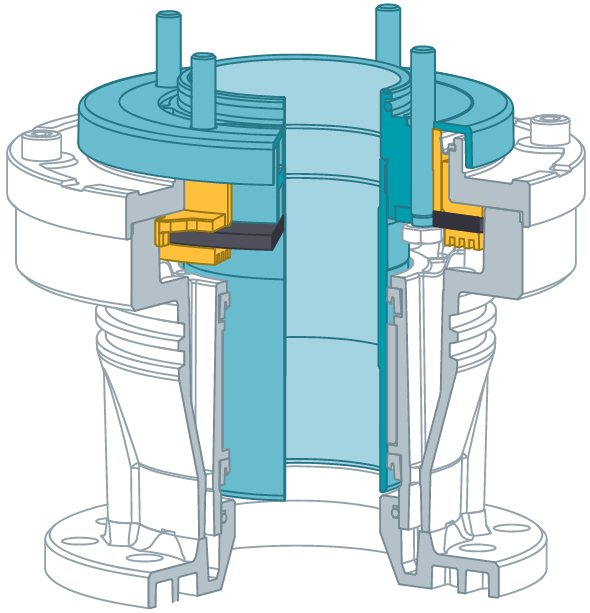 This mechanism is designed to allow the gun to maintain a constant rotation speed in all arising operating conditions independently of the prevailing pressure and flow levels.

This innovative device is capable of distributing the water uniformly, starting from the gun over its entire throw range. The technology and fluid dynamic elements designed into this component let the deflector adapt its operation to all pressure levels and upcoming changes. 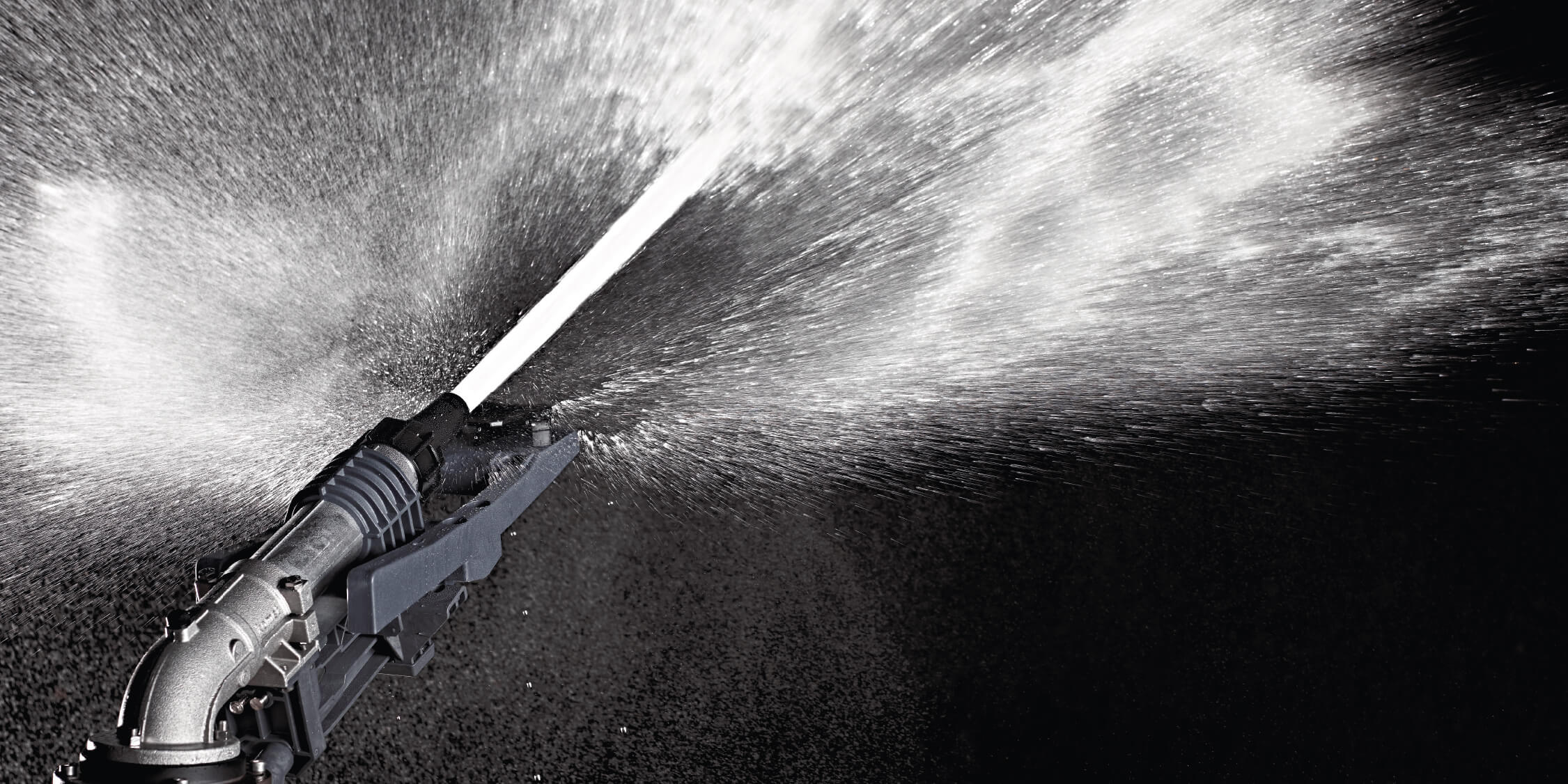 While in operation the deflector is designed to minimize the oscillation originating from the interaction with the water stream. This is fundamental in order to obtain a laminar water stream exiting the nozzle generating unrivaled throw values.

The configuration of the barrel and its internal straightening vanes has been optimized with the use of the most advanced hydraulic simulation software allowing the water to reach the nozzle with the least possible turbulences and pressure losses.

The particular shape of the Komet nozzle, manufactured with technical polymers, allows the transition from the diameter of the barrel to the diameter defined for the irrigation with the water retaining the maximum velocity and exiting the nozzle with a perfectly round water stream to reach unrivaled throw values. 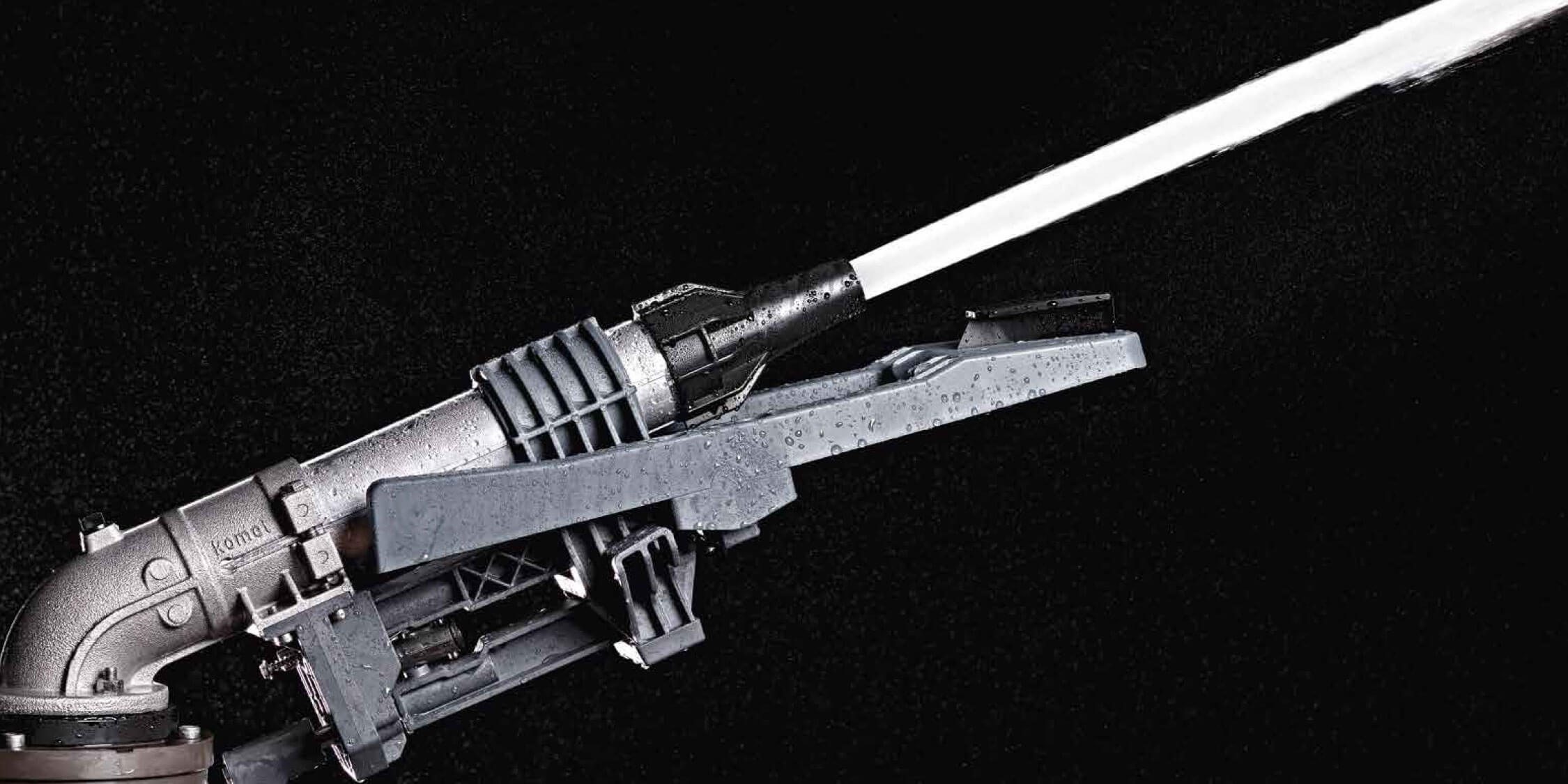 Due to the use of innovative materials with reduced specific weight and advanced tribological properties combined with the reciprocal calibration of the different components and respective systems, we were able to obtain the optimal performance from the automatic brake and the low inertia drive system. This allows for an efficient operation of the gun in all operating conditions including lower and variable pressure levels. 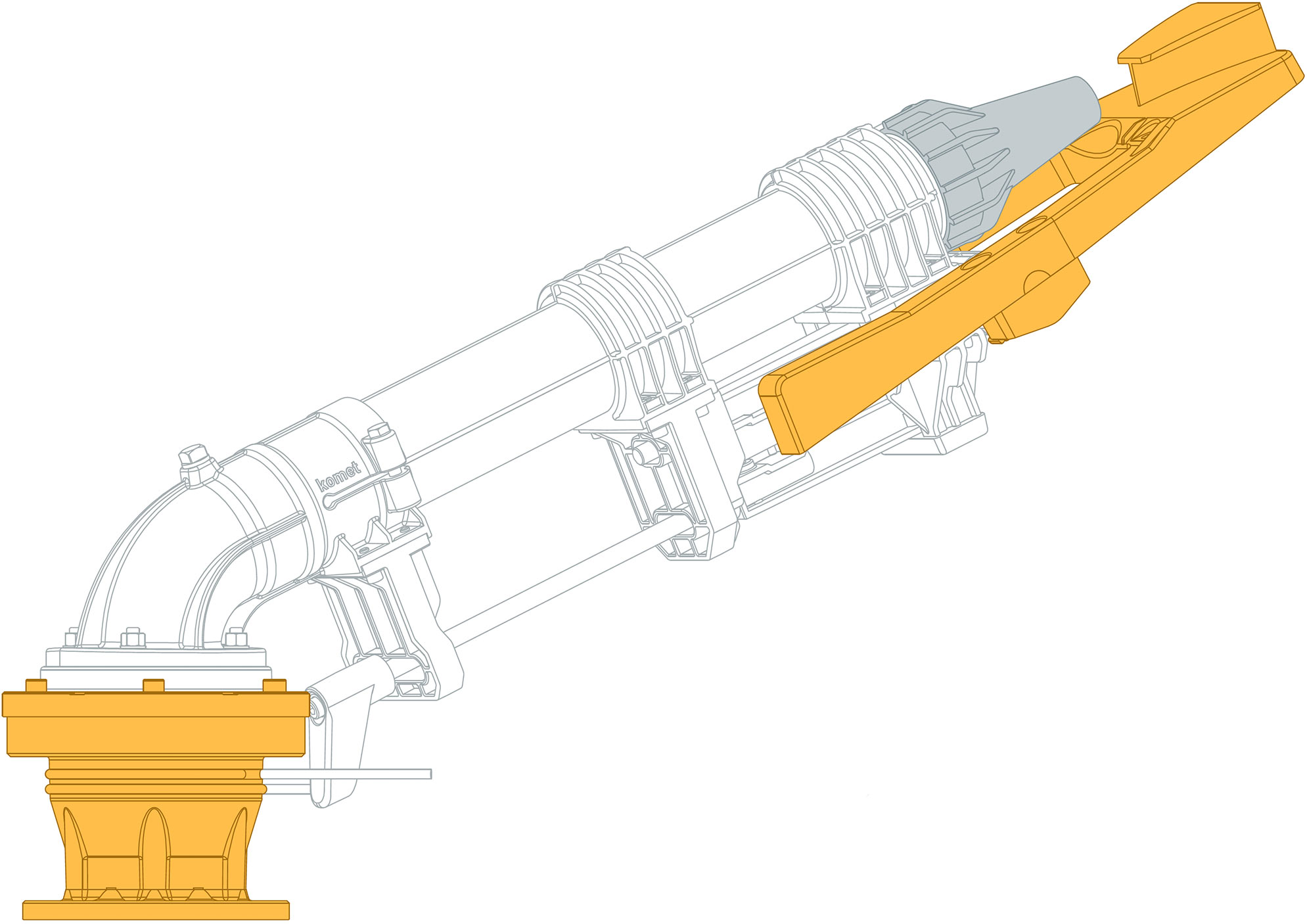 The Komet Balance System is based on the interaction between the self-adjusting brake and deflector. The resulting balanced operating mode allows for an excellent performance at all pressure and flow levels. The interactive balancing between the two elements is continuous and automatic. 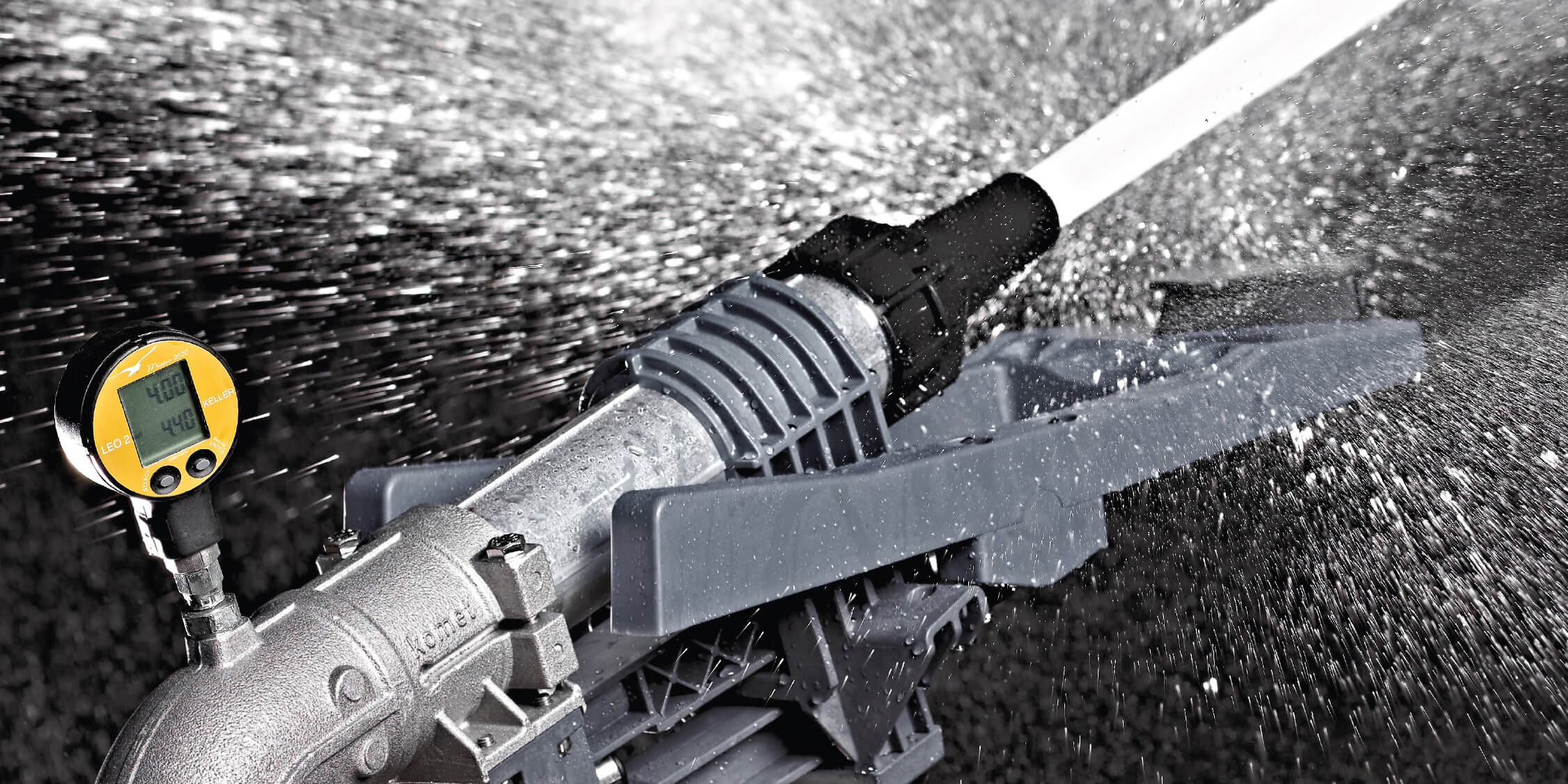 It is important that every irrigation system operates reliably in order to avoid yield losses, waste of energy with its associated costs but more than anything to optimize the soil potential. The gun not being continuously monitored, has to operate always at its best without the necessity of adjustments or maintenance. 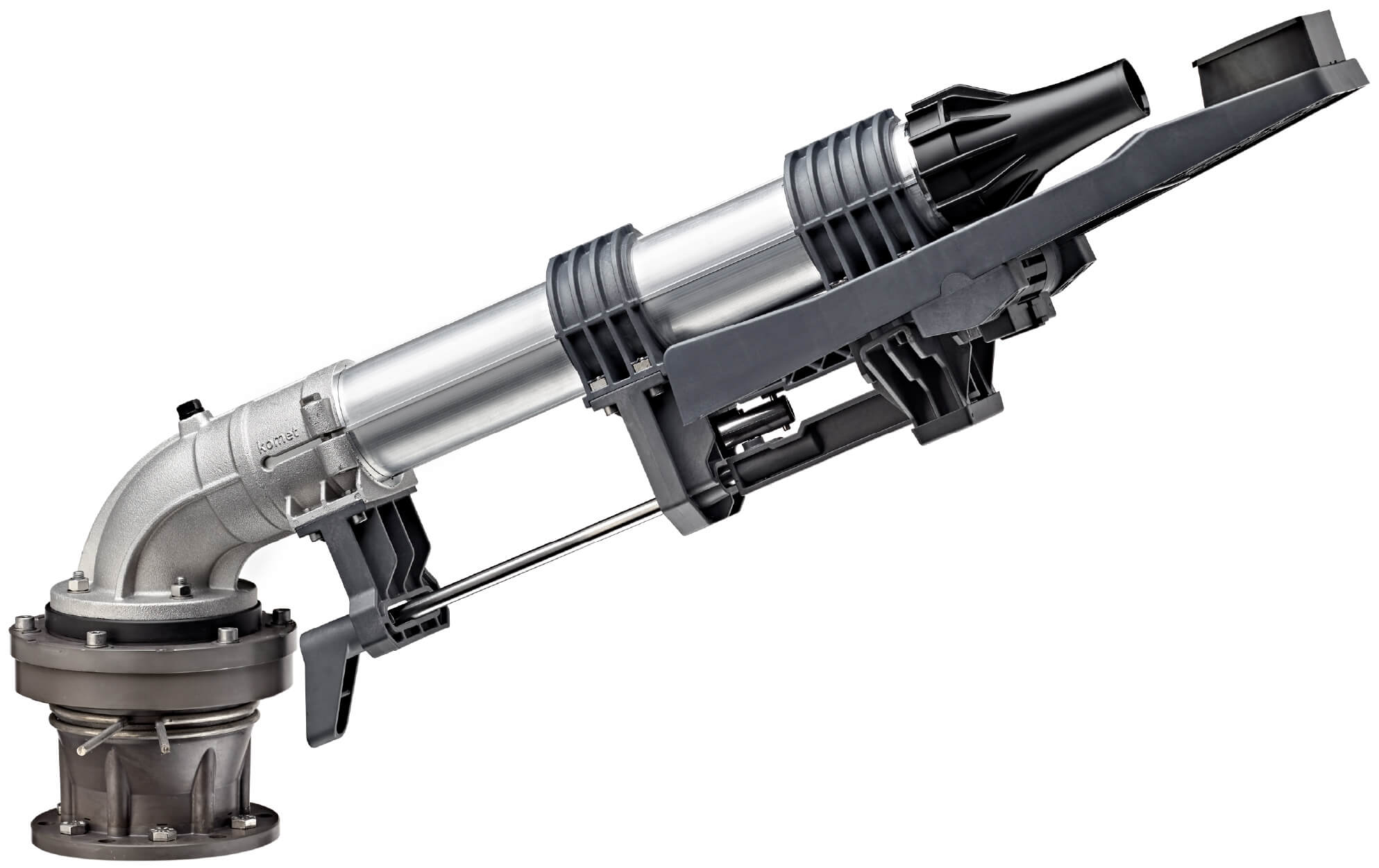 aThe barrel, made of marine grade aluminum, is designed to maximize throw and optimize distribution. The internal straightening vanes are the result of intense fluid dynamic studies. 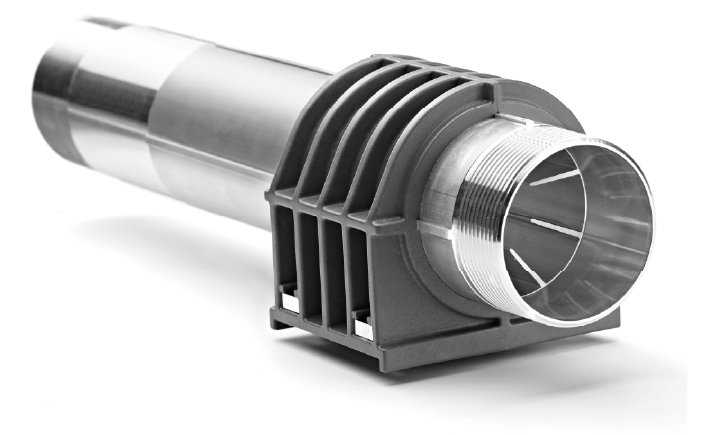 bThe drive arm mechanism is made of technical polymers that ensure superior performance and excellent resistance to wear, superior to aluminum. The reduced weight of the parts allows for very good operation even at low pressures. 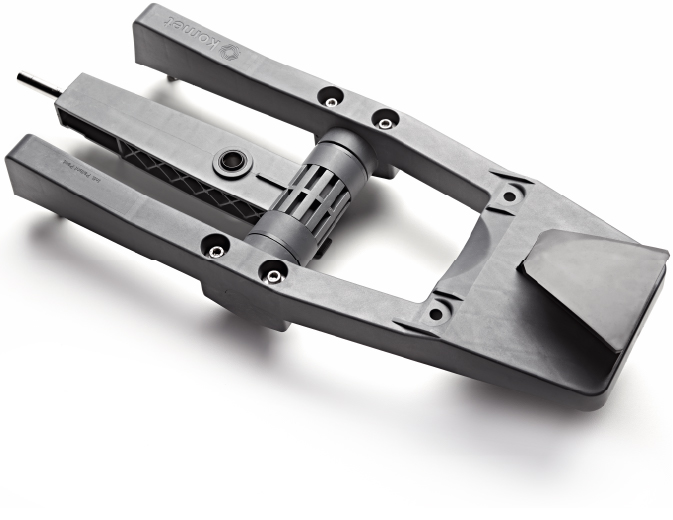 cThe Automatic Brake System is unique in its function due to the materials used. The internal parts are made of chemically treated stainless steel and inserted into an anodized aluminium housing to increase the resistance to corrosion and wear. 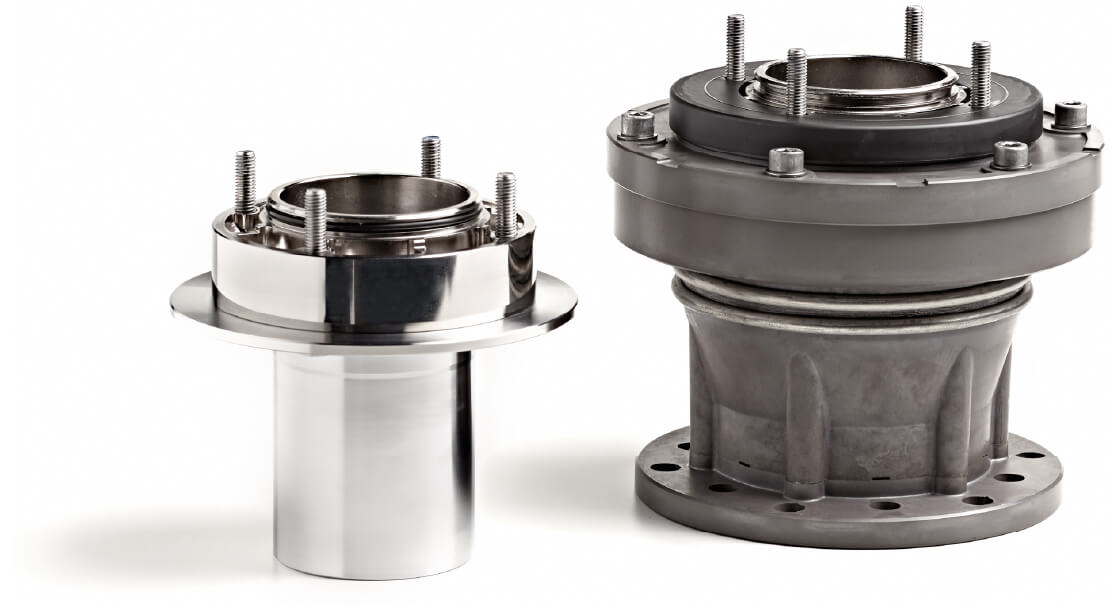 With changing operating conditions such as pressure and flow the gun self-adjusts all systems in order to allow always for an operation at best efficiency level.

Reliability is a main concern when designing our products. Each component is developed with the utmost care and the materials are selected to satisfy the requirements of the intended application environment.

The precision tooling of every component, the strict quality control during every manufacturing step and the final water test of every single gun are our guarantee of a quality control at its best. 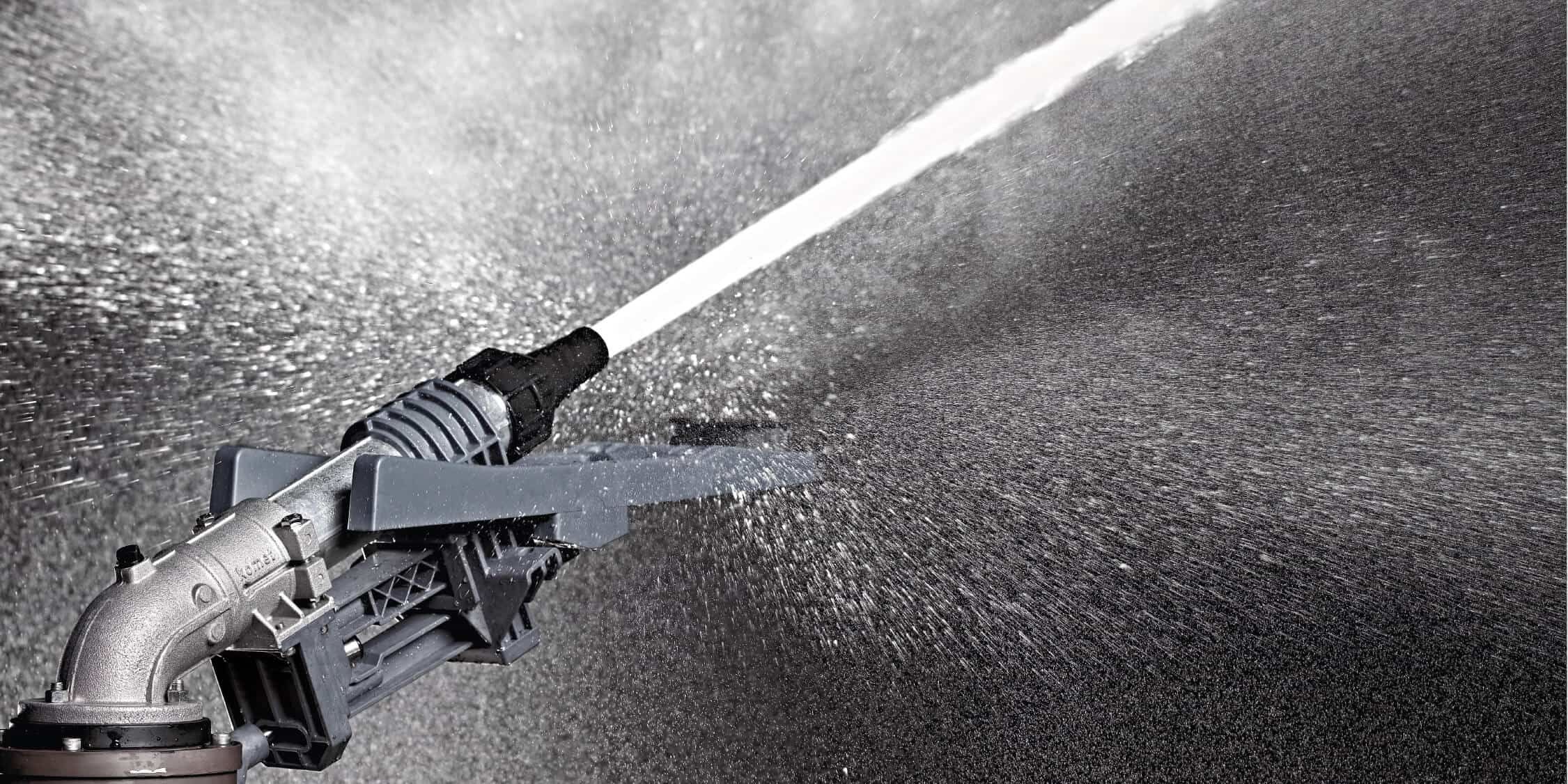 It is fundamental that a gun adapts to every situation while keeping excellent performance in all types of irrigation systems and environmental conditions, also extreme ones.

Staying within the boundaries of your own field is important for efficient irrigation. This not only saves valuable resources that would otherwise be lost to adjacent areas, but also avoids unnecessary discussions with the neighbours. If the field borders roads or adjacent fields, it is common to start irrigation towards the traveller, and manually change the irrigation sector afterwards. This procedure can now be automated with the patented Komet Inverter. 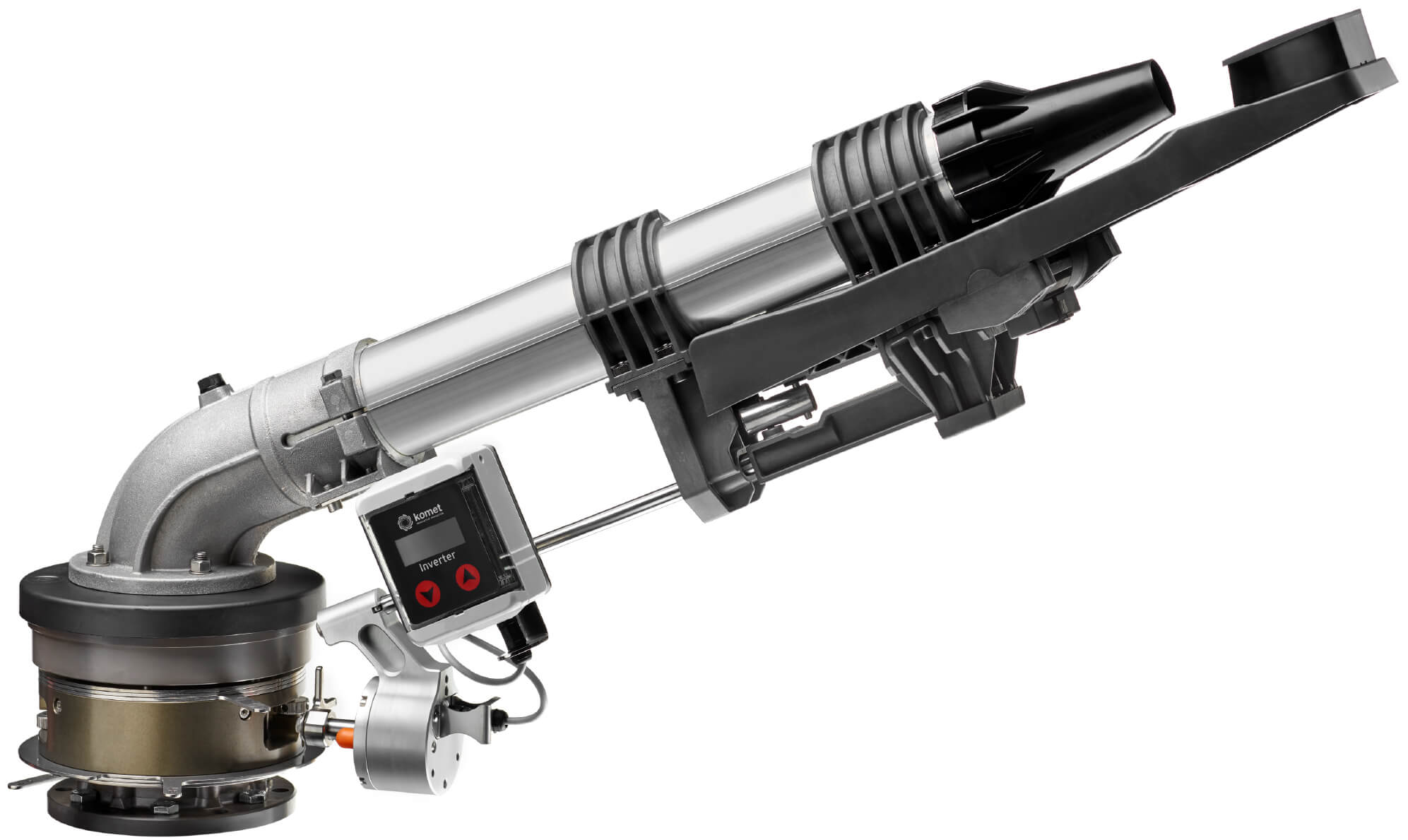 The time for the first irrigation sector can be set to a maximum of 999 minutes. After activating the timer, it remains in standby mode for 36 hours. Within this period, the operation can be started at any time. The countdown starts as soon as water runs through the sprinkler, in other words the timer is activated by motion.

The Komet Twin Inverter is suitable for the following applications:

The adjustment of the trajectory angle without internal flow restriction allows to adapt the irrigation to different climatic conditions including stronger winds. This capability to adjust is a real advantage also in cases where obstacles such as power lines need to be avoided.

The patented working principle of the dynamic jet-breaker allows to redistribute some of the excessive water from the end of the throw typical in low pressure conditions towards the gun. Another important advantage of this device is that it allows to adapt the water distribution profile to suit the requirement of solid-set systems.

Effect of the dynamic jet-breaker at low pressures

Effect of the dynamic jet-breaker at low pressures 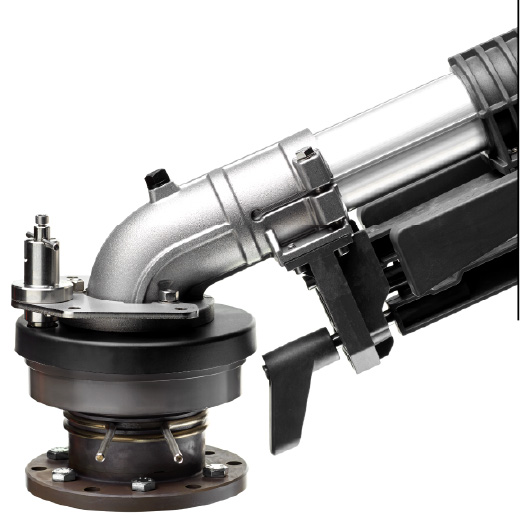 The availability of model specific counterweights allows for smooth operation of the gun on sloping terrain as well as on steep slopes. 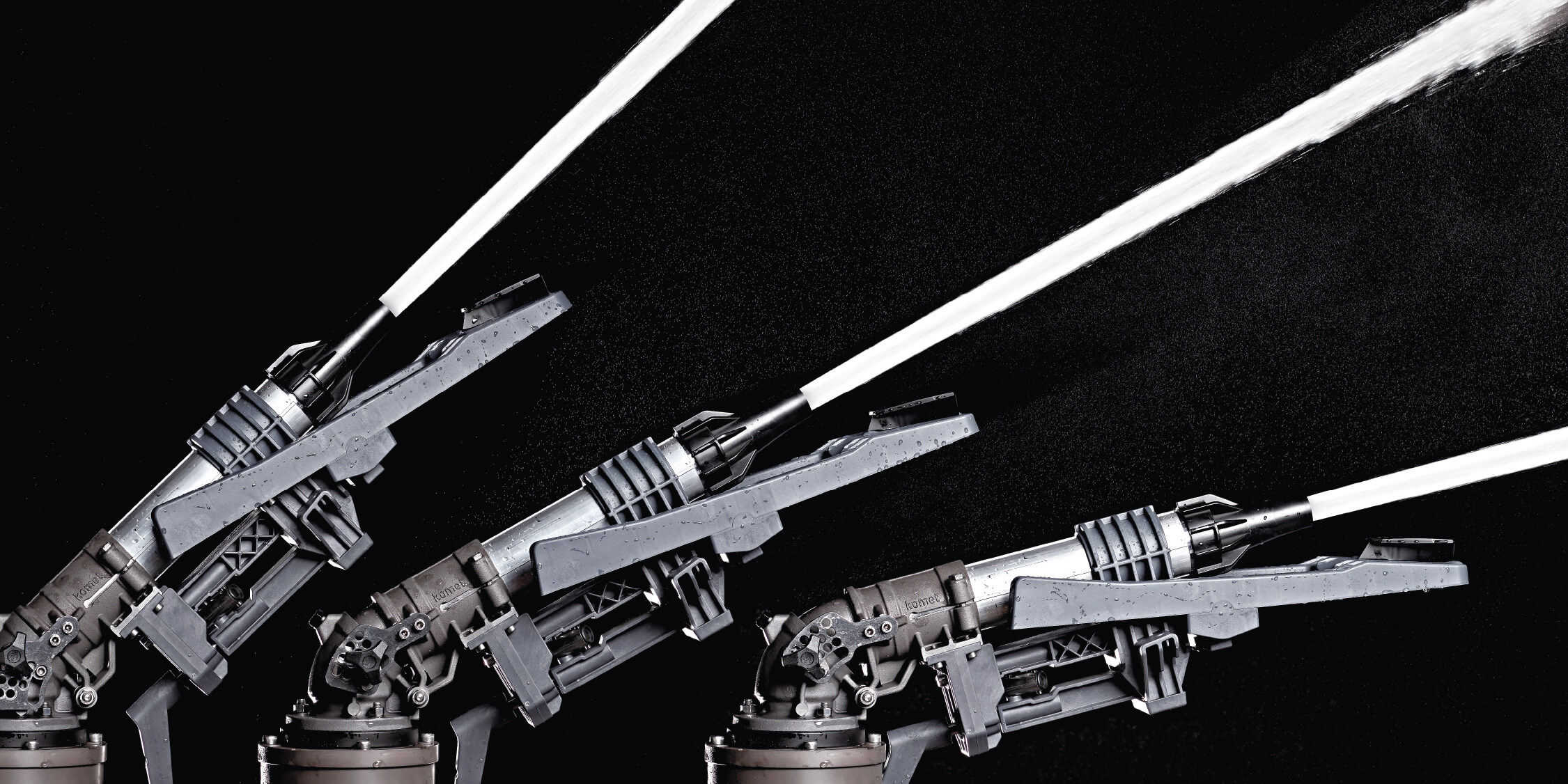 With its Twin Ultra long distance sprinkler line, Komet is offering a series of next-generation high volume sprinklers, which is distinguished by five major ad-vantages:

Komet’s high-volume irrigation guns even proved their merit at the 2016 Olympic Games in China: Komet was entrusted with the overall irrigation of the Olympic green areas – including the Olympic Stadium in Beijing. For this prestigious, large-scale turf irrigation project, the company opted for the Komet Twin 101 big sprinkler, encasing the long distance sprinkler in a box. “When it was time to irrigate the turf, the top cover opened, and the sprinkler rose into position. After irrigation, it was retracted, and the box closed automatically,” Komet’s CSO and Head of Marketing, Hugo Drechsel, explains.